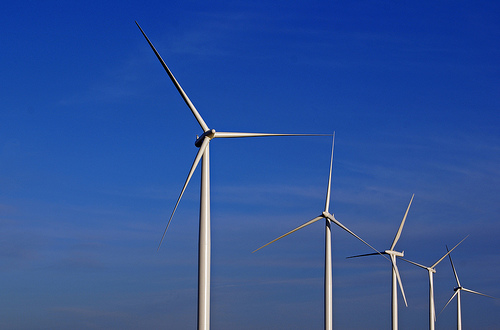 What is wind energy?

Wind represents a vast source of energy and has been used for hundreds of years in Britain to grind corn and pump water. It can now be used to make electricity and, for onshore installations, it is one of the cheapest sources. As the UK is the windiest place in Europe, wind power is one of the most promising renewable energy technologies and already provides electricity for nearly 250,000 homes.

What is a wind turbine?

Wind turbines range from small units of around 30 watts, used to charge batteries for caravans and boats, to giant structures of 3 Megawatts, with 50 metre long rotors extracting enough energy to run 3000 small homes. A turbine, basically, is a set of blades designed to rotate as the wind blows past them. The shaft to which the blades are attached is coupled to an electrical generator. The more wind that passes the blades, the more energy can be e3xtracted, so we have a situation where doubling the length of the blade increases the “swept area” by a factor of four. The bigger the turbine, the more economic generation of power there is.

Why are wind turbines sited on the tops of hills?

As the wind blows towards a hill it has to rise up the hill to get over it, in doing this the moving lower air joins with the air above it and so more air must pass over the top. The only way that more air can pass over the top of the hill is for its speed to increase.

Every time you double the wind speed, the energy increases eight times. This is the cubed rule and it indicates why we choose high wind speed regions to site wind turbines. Some of the best places in the U.K. are the north west of Scotland, north and south west Wales and Cornwall together with smaller areas of the East Coast. Other areas such as the Pennines and the North York moors are also good for strong winds.

What happens when the wind doesn’t blow?

If the wind isn’t blowing, wind turbines do not produce energy. In fact most wind turbine have a “cut-in” wind speed of around 5 m/s (approx 11 mph). This is why wind energy is known as an “intermittent” energy source and as such it needs to feed into either a storage system, such as a battery (for small scale applications), or into the electricity network – the national grid – where it can be combined with electricity from other sources.

Can I run my house on wind power?

An average house uses 4800 Kilowatt hours of energy in one year. A 300 watt wind generator working at peak output for maybe 30% of the time would provide you with about a quarter of this. Because of the intermittent nature of the wind energy a storage system would be required.

What are the environmental aspects of wind turbines?

Wind turbines occupy very little ground space and so can co-exist with livestock or even cereal crops. The only permanent use of the land is the concrete turbine foundations, service road and the transformer building.

For good wind speeds, the turbines need to be sited on high exposed land. However, as technology has developed and system costs have reduced it has become more feasible to locate wind turbines in less windy sites. The turbines, like other conventional infrastructures and power generation plant, such as power transmission lines and power stations, can be visually intrusive. There is therefore a delicate balance to be struck between the change in the landscape and wind power’s environmental benefits.

Noise from modern turbines is less than from many other everyday activities. Careful design, siting and operation have ensured that the noise is no longer a nuisance. Electromagnetic interference with television reception is not usually a problem and any remedial action is simple and cheap.

New planning laws have made it more difficult to build wind turbines, but it is still possible in certain areas where there is community support.

How much does it cost?

Other sources of information on this technology